I never thought I'd be visiting my home town on a tour organized by the Smithsonian Institution, but in April, 2006, Jim and I did just that. The tour was led by Edwin Bearss, who had been the historian at the Vicksburg National Military Park when I was growing up. From the perspective of a "townie," he was much derided as he changed the park from our local thoroughfare and playground into a respectable place to interpret the military actions of the siege of Vicksburg. So my enthusiastic participation in the tour was somewhat ironic.

Our touring wasn't confined to Vicksburg. The campaign against it in 1863 included actions in Louisiana and surrounding communities in Mississippi. We visited many of the locations. The campaign was too complicated to cover in any detail here. I recommend the book Ninety-Eight Days by the late Warren Grabau. And then there is Mr. Bearss' own "Vicksburg trilogy:"

What follows is just a sampling of what we saw. It is ordered by the sequence in which we visited it, which was in general the sequence of the campaign. 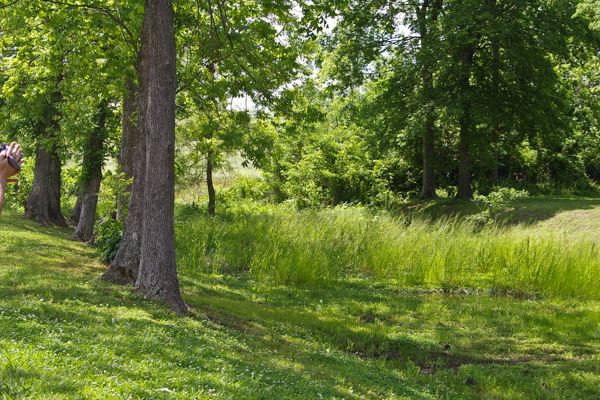 Prior to 1876 the Mississippi River flowed around an oxbow bend in front of Vicksburg. Confederate cannon on the high bluffs to the east controlled traffic on the river. The bend was so sharp that only a narrow neck of land was left between the upper and lower channels of the river.

General Grant put his troops to work digging a diversion across that neck on the Louisiana side of the river. It kept the troops occupied and, who knows, it might have worked.

This depression is what is left of their excavations. 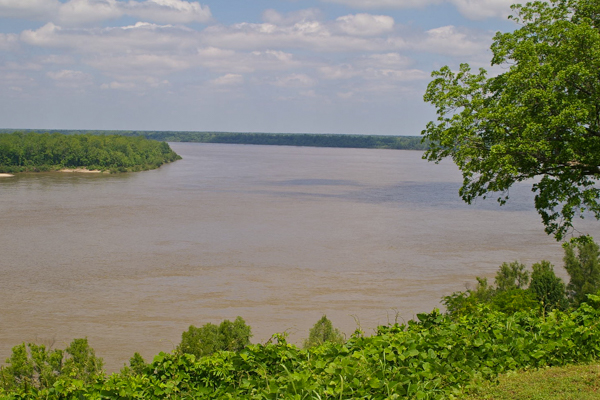 The diversion didn't work, but in 1876 the river itself decided to cut off that oxbow. Grant's canal is to the left of this view of the Mississippi looking upstream from South Fort.  Vicksburg proper is much farther to the right of this picture. Since 1876 the U.S. Army Corps of Engineers have dug a canal diverting the Yazoo River by the city enabling it to remain a river port.

This picture gives an indication of how the batteries on the Vicksburg bluffs could control shipping on the river.

Although most of the batteries at Vicksburg today are reconstructions, this cannon was actually used during the action - although not at this location. It is named The Widow Blakely.

The older river bridge can be seen in the background. It is not far from the location of Grant's canal.

Another famous gun used in the defense of Vicksburg was Whistling Dick, but it disappeared after the siege. (The photo at the link is identified by the Library of Congress as Whistling Dick, but there seems to be some controversy over that attribution. The nearby soldiers look like bluecoats to me!) 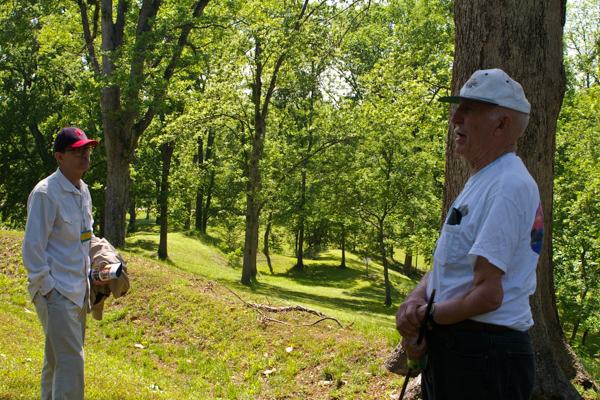 Grant ferried his troops across the Mississippi south of Vicksburg near Grand Gulf, MS. His intent was to encircle the city and establish a siege.

This fortification was known as Fort Cobun. Since the Civil War the river's course has changed and the location no longer commands a view of the river. The river has eroded away most of the town.

Only two original houses remain of the town of Grand Gulf. 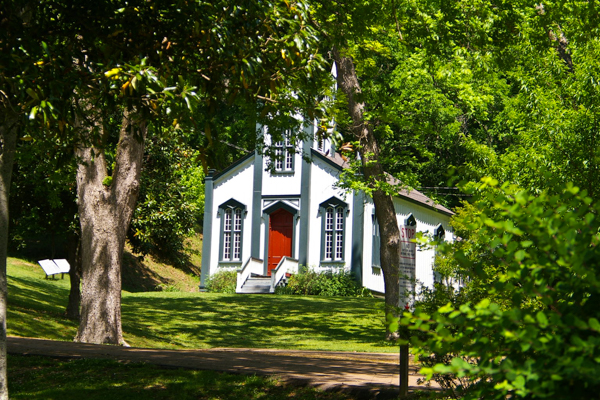 The nearby town of Rodney was left high and dry when the river moved away and is a ghost town today. We did not visit it on this tour. The Rodney Catholic church has been relocated to the Grand Gulf park. 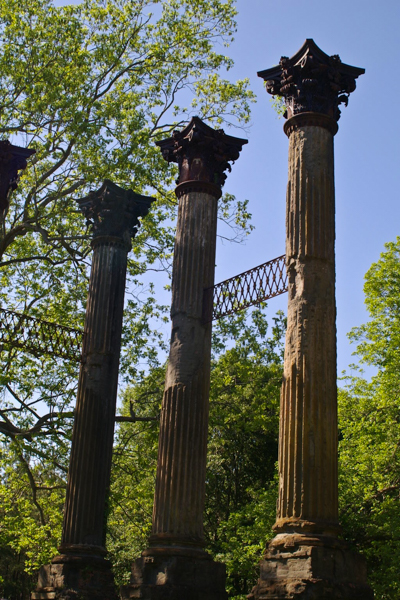 Windsor plantation house survived the Civil War to burn in the late 19th century. Only the huge columns remain. Hollywood came to the area with location shots for Raintree County starring Elizabeth Taylor.

When I was growing up, the ruins could be seen from a distance. Trees have grown up and now you must be practically inside to see them. 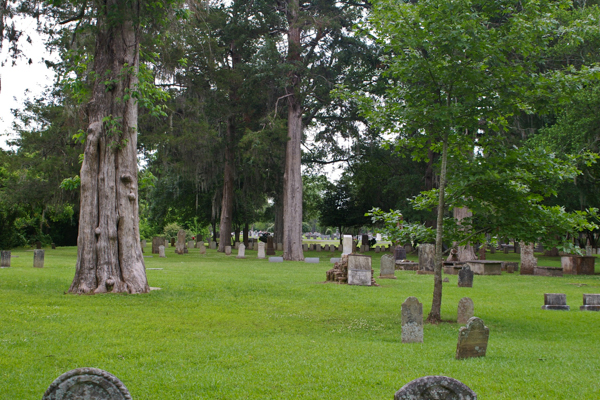 From Grand Gulf, through the Romney area, to Port Gibson we followed Grant's march as he encircled Vicksburg.

There is a legend that Grant deemed Port Gibson "too beautiful to burn." Whether that is true or not, the town was not destroyed.

We visited Wintergreen Cemetery where Confederate dead are buried. The cemetery contains the grave of Maj. General Earl Van Dorn, killed not by Yankees but by a jealous husband!

We continued to follow in Grant's track up the Natchez Trace toward Raymond. The army lingered near Willow Springs at Hankinson's Ferry on the Big Black River.

By his actions in this area, Grant succeeded in isolating Vicksburg from the south.

Mr. Bearss pointed out that during the Civil War period and well into the 20th century these rural areas were densely populated. Nowadays most people have moved into towns and cities. The land is given over to enterprises like pulpwood production that are not as labor-intensive as cropping. 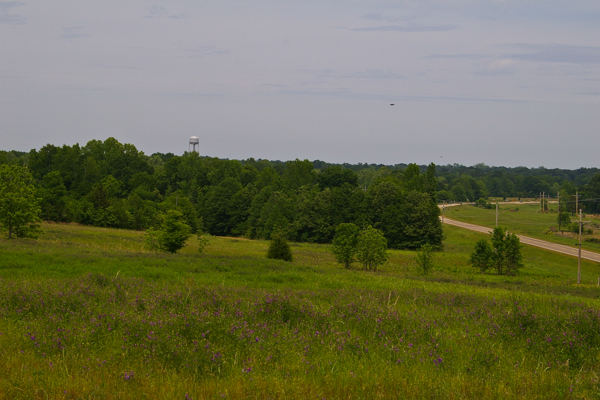 The battle of Raymond was key to isolating Vicksburg from the east. The Confederate forces had the lower ground here as the Federal forces marched from the southwest.

The battle was a close one, but the federal forces carried the day. 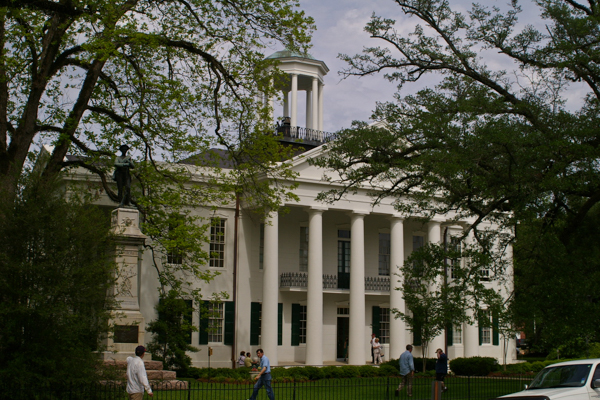 After the battle, federal forces marched into the town of Raymond. The ladies of the town had prepared a sumptuous spread for the Confederates that they believed would win.

The Union soldiers were happy to benefit!

A monument honoring the Confederates has been erected on the courthouse grounds.

From Raymond we traveled west to Champion Hill. This was the part of the tour that I had most anticipated and it was disappointing.

The battle of Champion Hill was chaotic and the physical landscape is still in private hands without any interpretation. The remains of the Coker House, shown here, are an indication of the physical state of everything we saw. In the years since, the Mississippi Department of Archives and History has acquired and restored the house, although it is not open to the public.

One benefit of putting together this narrative (in 2012, updated in 2019) is that I discovered a web site containing fascinating information about Champion Hill written by Mr. Bearss late wife, Margie, a noted historian in her own right. The vignettes at the link give life to the history.

I have no picture of the  Big Black battlefield because we ran out of time. Another disappointment. Click the link to see pictures.

The next day we toured the Battlefield Park at Vicksburg. At the park headquarters we visited a display of the many cannon types that were used in the action. Who knew there was such a variety?

Vicksburg sits on high loess bluffs overlooking the Mississippi basin. The city's defenses were on high ground and difficult to take by force. The Union forces tried more than once to storm the fortifications before they decided to lay siege.

Imagine what it must have been like to attack this position in the face, not only of fire, but also of a tangled abatis guarding approaches like this one. I can attest how hard it was to run up such an approach because my friends and I did it many times.

Large monuments honoring the states participating in the action are located throughout the park. They are generally located where their troops served. 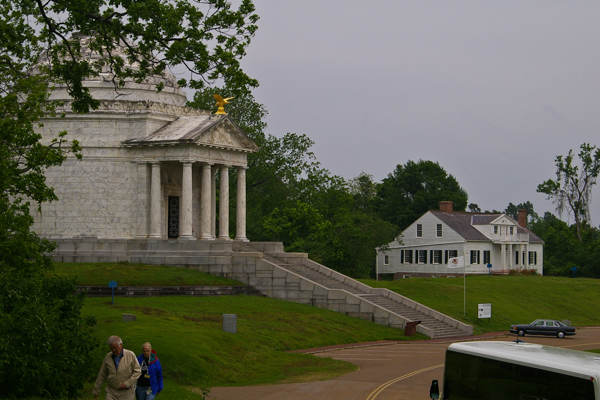 The Shirley house on the right is the only structure within the Park's boundaries that dates from the war.

The Illinois Monument is the grandest of the memorials within the park. I loved to visit it as a child because of the echo inside.

These are located on the "Graveyard Road" approach to Vicksburg, the site of the first frontal assault on the city. It failed with heavy losses. A second assault also failed. Grant and his army then settled in for an extended siege. 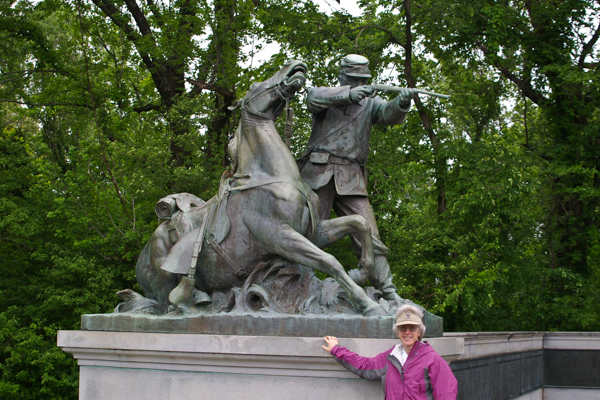 My favorite sculpture when I was a child was at the Wisconsin Monument. I could scramble into the saddle of the horse! Somehow I didn't realize that the horse portrayed was wounded and probably dying. To me it was simply a chance to "ride."

The monuments in the park mostly date from the early 20th century, but at least one, the Kentucky Memorial, was dedicated in the 21st century.

I'm sure that every town has its location where young folks go to park. Often these locations are the scenes of cautionary tales such as the hook. In the days of my youth, Grant's headquarters was THAT location. We called it "five faces" because of the sculptures shown here.

Nowadays admission to the park is limited and it is not open after dark. Ed Bearss was one of the driving forces behind that change. It didn't make him popular in Vicksburg. 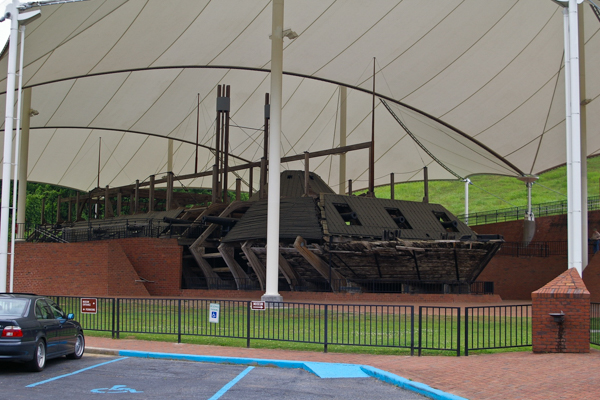 In the mid-1950s Ed, Warren Grabau (the father of my best friend growing up) and Don Jacks did extensive research and exploration to locate the resting place of the USS Cairo, the first ship in history to be sunk by an electrically detonated torpedo.

Many residents became enthralled in the discovery of the ship and the attempts to salvage and preserve it. Numerous difficulties, including the death of a prominent local doctor, had to be overcome before the ship could be raised (in pieces) in 1965. A teaser video on YouTube introduces the story. A 2019 presentation by Ed on the raising of this vessel gives insight into the difficulties -- and his delivery, which hasn't changed since we were on this trip. It is a one hour video (with slides) and opens in a new tab. He is 96 when giving this presentation and gets his dates mixed up, but not his stories! My friend's dad is the unnamed geologist. An archive of papers (opens in new tab) at the Yazoo City Library has more information than you ever wanted to know about the Cairo -- including how to build one just like it!

Many artifacts were discovered and the Park Service constructed a museum to house and interpret them. 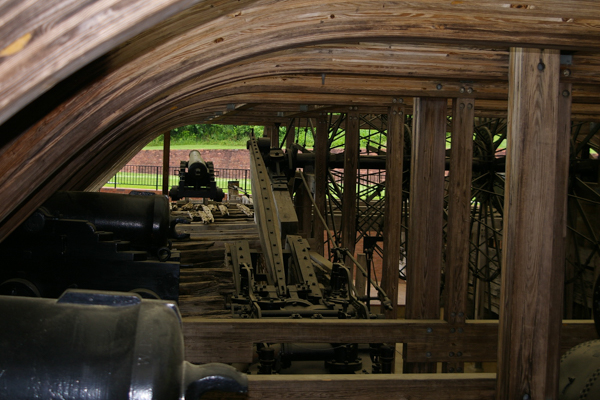 Funding and technical delays almost resulted in the loss of the ship itself until the preserved remains were finally conserved beside the museum housing the contents.

Although the metal parts, the iron cladding, the cannon, and the engines were saved, the picture shows that very little of the wooden structure was salvaged. Almost all the wood pictured is reproduction. 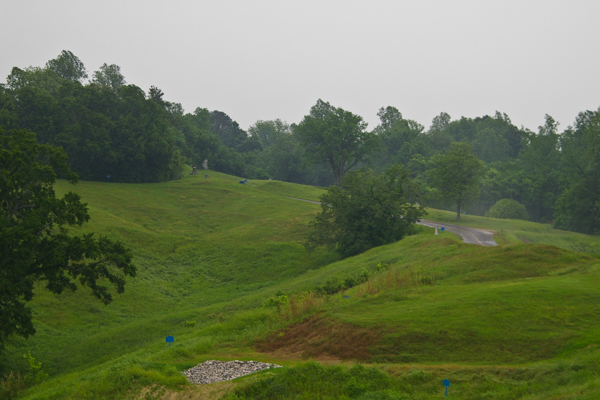 Our final stop after visiting the Cairo museum was the location of the meeting between Generals Grant and Pemberton for the final surrender of Vicksburg after a long and brutal siege. General Pemberton may have chosen July 4 for the surrender date in hopes of getting more lenient terms. The unintended consequence was that Independence Day was not celebrated in Vicksburg for many years! As William Faulkner, a Mississippian, wrote: The past is not dead. It's not even past.

By the time we got there a thunderstorm had moved in. Pouring rain and intermittent lightning resulted. Most of our group slogged out with Ed to hear details of the surrender, but Jim and I didn't think it was a great idea to be standing in the storm holding a dandy lightening rod disguised as an umbrella.

We were quite satisfied with our decision to visit my home town as tourists!