In November, 1973, I continued my business travel to various Army bases to prepare them for transition to the new VTAADS computer system that I described in the write-up on my first such trip to Panama. This trip to Colorado was the last such trip I made. Very shortly afterwards I transferred to another division within the Computer Systems Command. That didn't stop the travel, it just changed the work I did when I got there.

The site we visited in Colorado was Fort Carson, outside Colorado Springs. I was to return to the area not long afterwards in conjunction with my new position, but that's another story.

There are a couple of ways to follow me on this trip. I've tried to make the narrative a complete summary, but I've used many links to other web sites to provide additional details and sometimes pictures. You can either stick with the basic narrative or explore the various links. At the time this album was created the links were all valid, but the WWW is in constant flux and that can change. If you encounter broken links, please send some email. 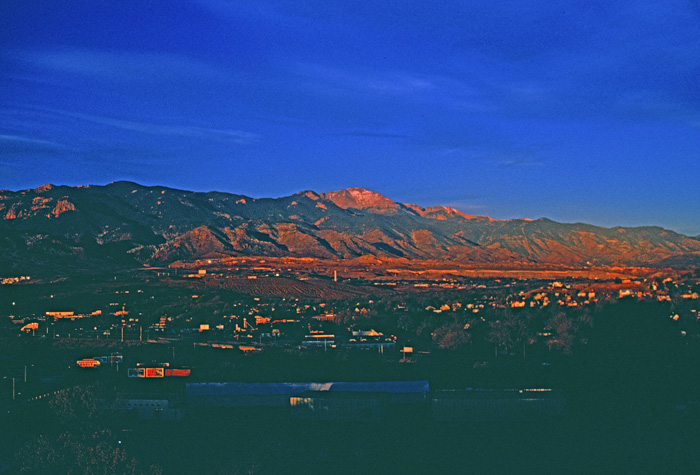 I don't remember why I would have been up at dawn to capture this picture, but obviously I was.

One thing I do remember about this trip was encountering the infamous "SOS" Army breakfast. I love creamed chipped beef on toast so I was puzzled why it had such a bad reputation. Well, now I know. (It actually wasn't that bad.) As you can see at the link, the Army version of this comestible uses ground beef rather than chipped (dried) beef. Chipped beef is better! 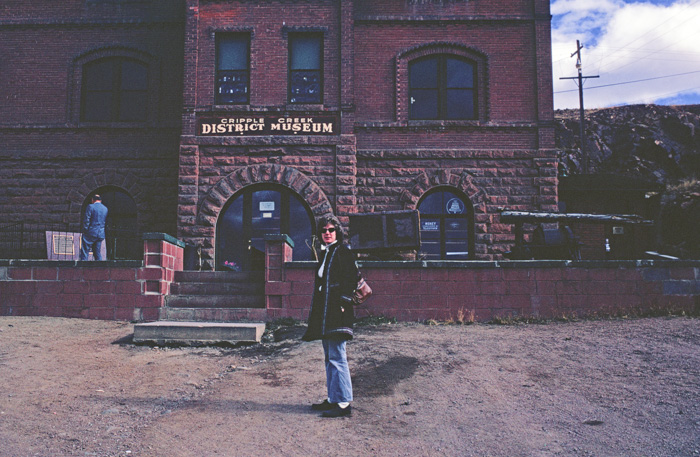 One possible reason for the early morning rise was a trip to Cripple Creek. A benefit of this particular training gig was that some days were spent analyzing the existing data and drawing up conversion plans. The local folks then spent a day putting together the actual programs. Since they didn't need our assistance for that, we could take the day off.

There are a couple of ways to get to Cripple Creek from Colorado Springs. There is the paved highway route and the Gold Camp Road. We didn't take Gold Camp Road on this trip, but Jim and I took it many years later. It was a hair-raising excursion. Check the picture at the link and imagine encountering a logging truck! The road has now been closed to vehicular traffic. Jim was happy to hear that! 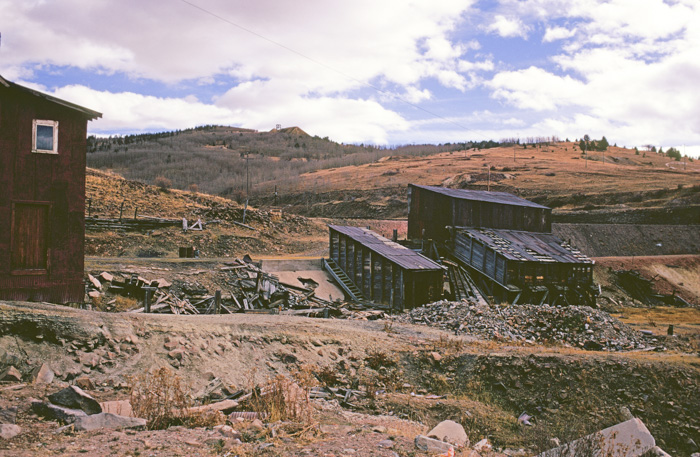 The mines in Cripple Creek were still active at the time of my visit, but the town was not exactly thriving. 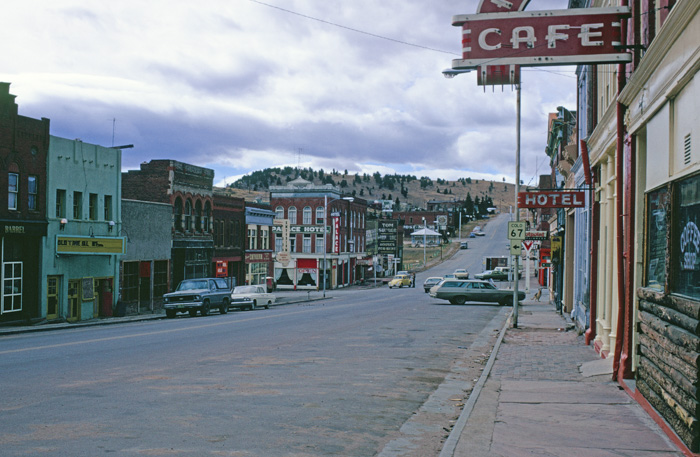 Today, now that gambling has been legalized, it has an active tourist industry. Back in 1973 there wasn't much going on. 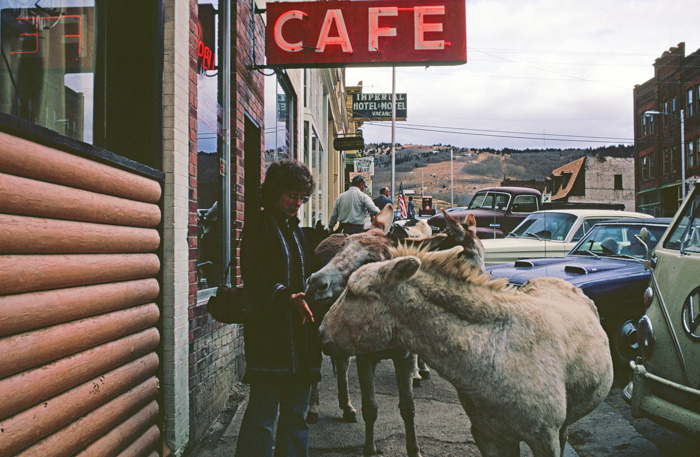 We met these friendly fellas just wandering the streets.

The coat I'm wearing was one of my favorites. Whenever I'm tempted to scoff at some of the impractical clothes that young folks wear nowadays, I need to remember that coat. It was very stylish for its day, but it was completely dysfunctional as a winter coat: it wasn't water repellent and it wasn't warm. 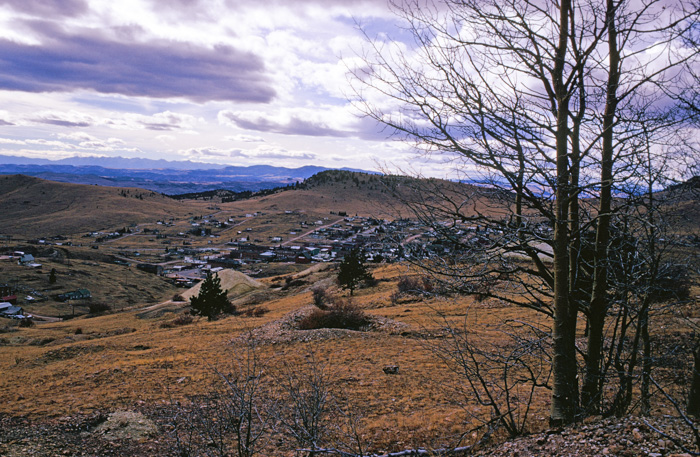 An overview of the town as we are leaving.

Even though we took the major highways, the scenery was spectacular. 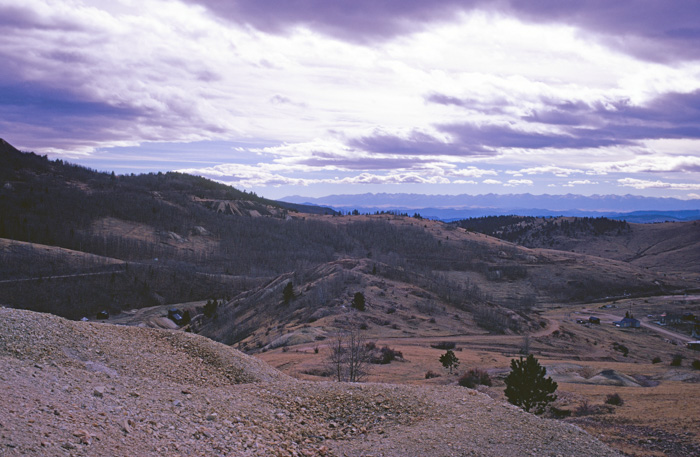 Heaps of mine waste disfigure the valley.

Most of what is shown here is waste rock removed to get to the ore. Some of the mines were "glory holes," small operations that simply left pits and little heaps of rock. Others were quite large and left huge mounds of rock. It's hard to see in this picture, but there is a large dump in the background toward the left of the image.

Mine tailings are another matter. We will see some of them later. 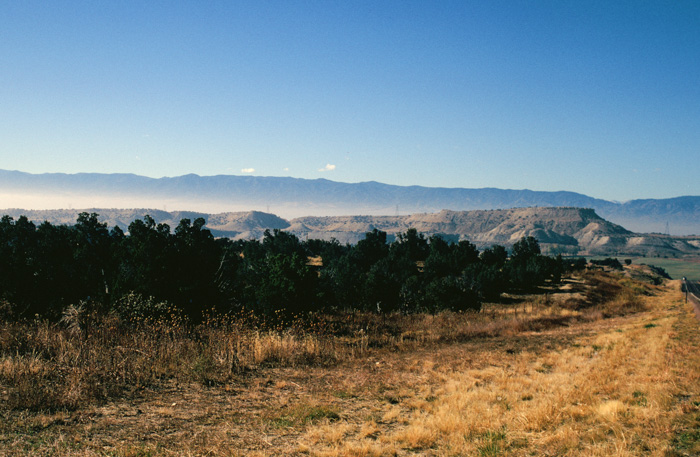 More mounds of waste rock can be seen at the base of the butte in the distance. 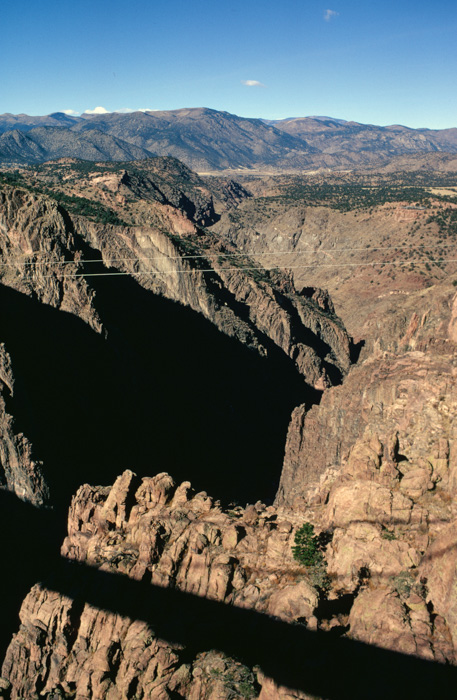 After our work was done, I took a few days off to travel around the area. I bid my colleagues adieu at the Denver airport and rented a Ford Pinto for my excursion.

The Arkansas River carved the Royal Gorge beginning about three million years ago. The name of the river is pronounced in these parts as ar-KAN-sas rather than ar-kan-SAW.

The bridge, whose shadow can be seen here, was the highest bridge in the world until the early 21st century. 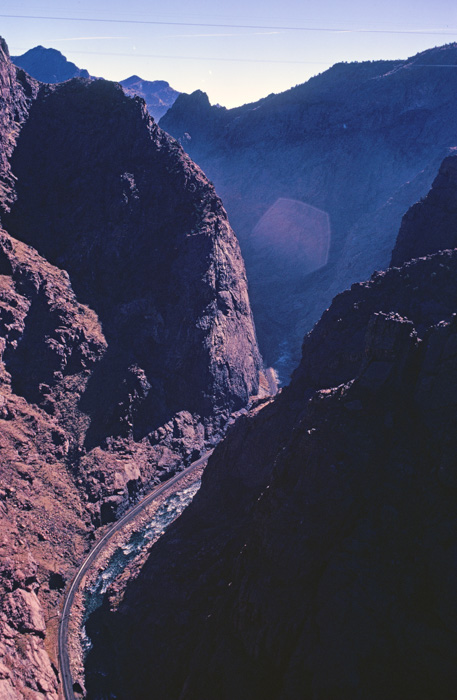 The rights to build the railway line at the bottom of the gorge was a contentious issue. The railway war between two rivals ended in the Denver & Rio Grand winning the rights to the line constructed to reach the mining districts west of the Front Range. Old West gunslingers such as Bat Masterson, Doc Holliday, and others saw hot action in this dispute.

Today it is used by the Royal Gorge Route excursion line. 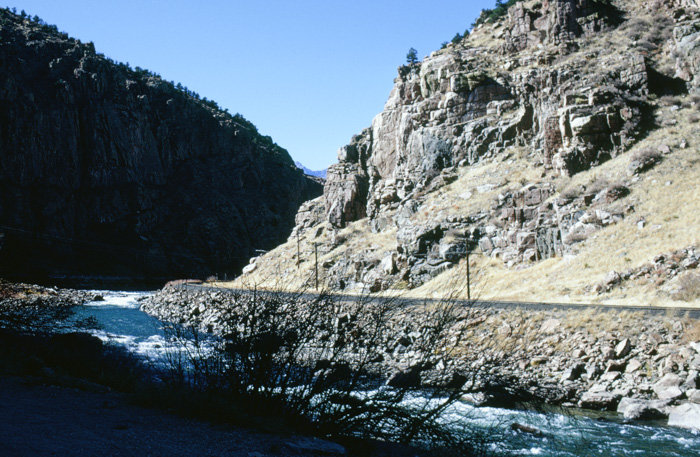 Somehow I got down to the river's level in my trusty little Pinto. 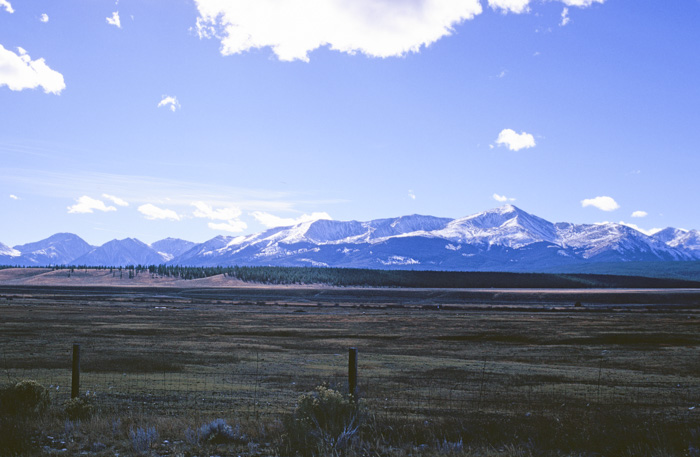 I eventually needed to get back across the Front Range. There aren't that many crossings.

At this point I'm headed north in the valley to the west of the mountains. As you can see there has been some recent snow in the high country.

I'm not certain, but I think the highest peak in this picture is Pikes Peak. Many years later Jim & I took the cog railway to the top of this peak while we were in the area for a USGS Water Conference. 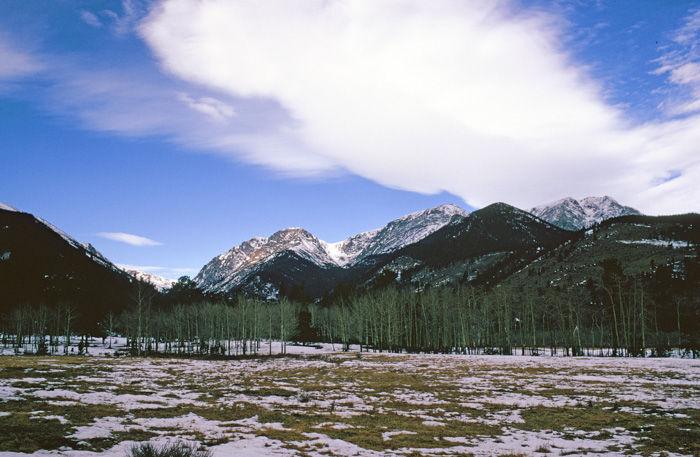 I'm climbing into the snow zone. This is a natural meadow. 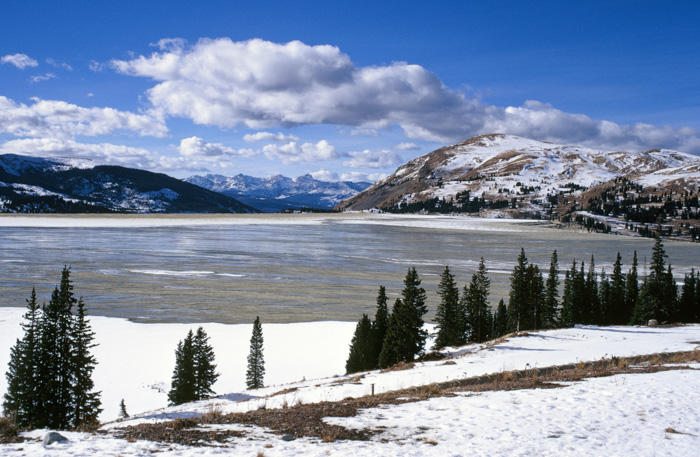 This, on the other hand, is a massive deposit of mine tailings. You can learn more that you ever wanted to know (or will remember) at the link, but the basic things to take away are:

This particular tailings dump was, as I recall, stored behind a kind of dam that kept it confined in one place at least. I have no way of knowing to what extent (if any) this particular site was polluting the surface or ground water. Later I visited other abandoned mines that leached toxic materials into the environment. 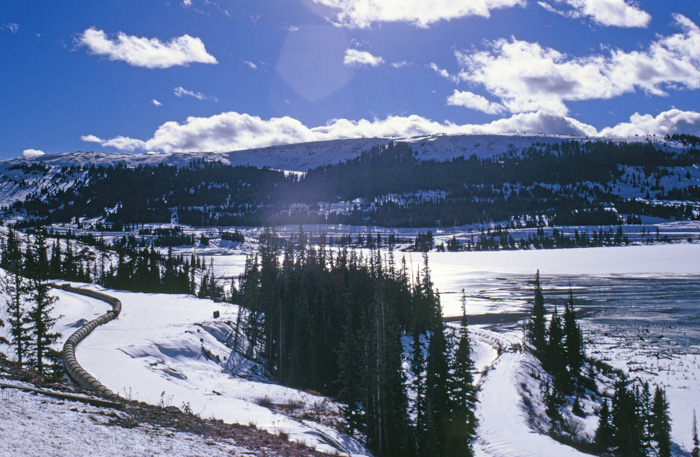 Another view showing the pipe used to bring the waste slurry to the dump. 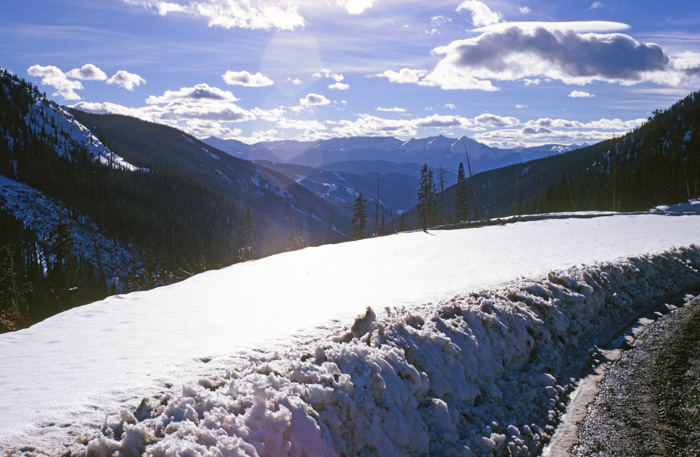 Climbing up toward the pass on my way back to Denver. 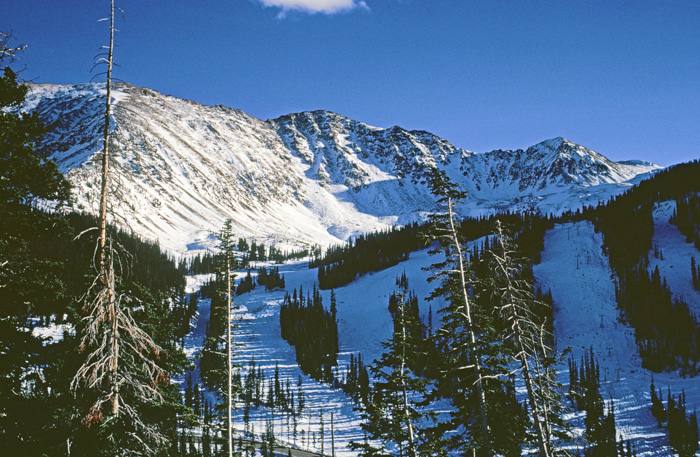 I was not a skier at the time, but I must have been prescient to take this picture of the Arapahoe Basin (or A-Basin) ski area. I have not skied there and probably never will, but at least I have the picture! 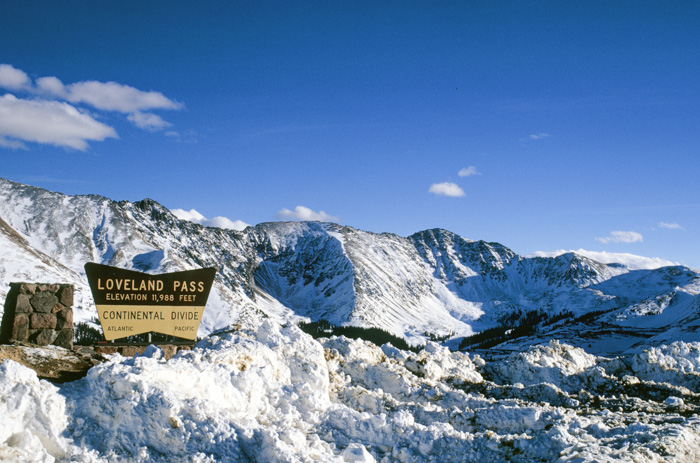 The Continental Divide. There were times when I wondered just how trusty my little Pinto would be in these conditions, but it sailed on through. Loveland Pass remains open in the winter nowadays, but I'm pretty sure that it was scheduled to be closed for the season shortly after my trip. 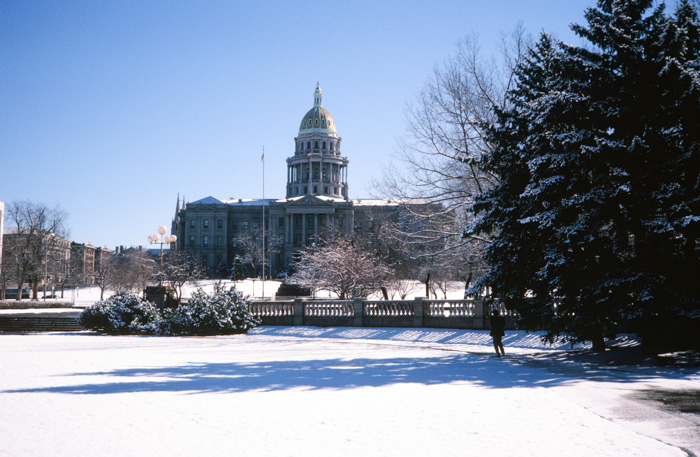 By the time I reached Denver, it had snowed in the city.

I didn't have much time to spare, but I did visit the park around the state capitol.